Week’s 4 lecture was very shocking! I now view the world in a completely different way. I had no idea that there are over 6 billion mobile devices in use today. This clearly portrays how the number of mobile devices exceed the world’s population, but what I find really shocking is how it’s only 2014! What does the future have in store for us? If the mobile-connected devices exceed the world’s population as of now, and the world is just beginning—the population is increasing by every day and technology is expanding as every second passes—how will the world end up in, lets say, 4-8 years from now? According to Cisco’s VNI (Visual Networking Index), by 2018 the monthly global mobile data traffic will surpass 15 exabytes (15 billion gigabytes)! That is to say, the amount of storage 15 billion gigabytes would hold will be roughly 50 thousand years worth of high definition videos. That is an extremely large amount! Aside from the global mobile traffic, mobile network connection speeds will increase two-fold and the amount of traffic an average smartphone will generate will increase five-fold! This is exactly where mobility first has to take a stand. As mobile users continue to increase and technology continues to expand, the IP based network model will not be able to handle all of that traffic.  Mobility First plans to change the way the network works, and instead of using Ip’s it will use names (GUID’s). Aside from the GUID’s there will also be human readable names and network address locators. Even though this topic is still under research, the idea and concept is there, and if this takes over the network we currently have in today’s society sometime in the future, I believe that the internet will be a better, faster and more reliable network than ever before!

I finally finished week 4! If there was one thing I really learned during week 4, it would have to be that I learned nothing! This is, by far, the hardest assignment I have ever done or even faced in my whole entire life. At first, I was fine with android. It was a little tough, but comprehendible, but as soon as I was forced to learn how to incorporate the Wifi-Direct API’s into my project, it became a nightmare! The documentation is very poor, the examples are way too basic and the concept is too vague. So much so, that after spending almost my whole week just reading and messing with the examples and tutorials provided by android, I felt like all hope was lost and I simply just  wanted to drop out. The only productive thing I got out of this week was that I had finally thought of an idea of how to use Wifi-Direct inside my sticky note Application. My idea was really simple, yet extremely fascinating…well at least for me. Once the user clicks on the share button, it would connect to nearby devices using Wifi-Direct and then it will show the user a list of all the sticky notes he/she has saved on the phone. After the user selects one of the sticky note files, it will send it to the other device that has opened a connection, and they will receive it in a full screen mode. Aside from viewing it in a full screen mode, the user should be able to edit it also, and even send it back to the original sender! I had everything set up and ready…well at least in theory anyways. The actual code was ridiculous. I was so lost, that I didn’t even know where to start. After hours of looking through online source code and examples of the Wifi-Direct API’s, I decided to forget about that for the moment and try to refresh my mind by working on something that seemed possible at the time. I then started looking through my code and realized that my photo button in the menu was  just taking up space that I can use to create my “share” button and the default logo for my app was too simple. So for a few hours I worked on deleting everything that had to do with taking a picture, and replaced it all with the code needed to switch to the Wifi-Direct activity, which I still didn’t have, but at least I was laying down the foundation for it. After completing that, I worked on the logo. I really didn’t have the time to spend making an official logo using Adobe photoshop or illustrator, so I just used the sample picture that I was using as a “splash screen” to create the logo using the Image Asset function in Android Studio. The screenshot showing the new menu and logo can be found below: 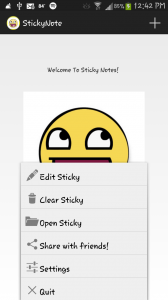 Finally everything was in place and it was time to actually implement the Wifi-Direct features into my application. So onto week 5 we go!